Over the years Dr. Calhoun presented papers at numerous conferences around the world.  His insight was sought by a variety of organizations, from the sugar cane growers in Hawaii to the Corrections Department in the District of Columbia.  Below are some of these instances.

1962 Center for Advanced Study in the Behavioral Sciences at Stanford University He was invited to join the Center for the 1962-1963 year.

1968 December AAAS (American Association for the Advancement of Science) annual meeting. This meeting was in Dallas, TX.  Dr. Calhoun was one of the key speakers at this conference.  One evening Robert Ardrey, the author of African Genesis, joined us for dinner.

His name was put forth to be nominated for the Nobel Peace Prize.

A card John Calhoun wrote regarding this nomination 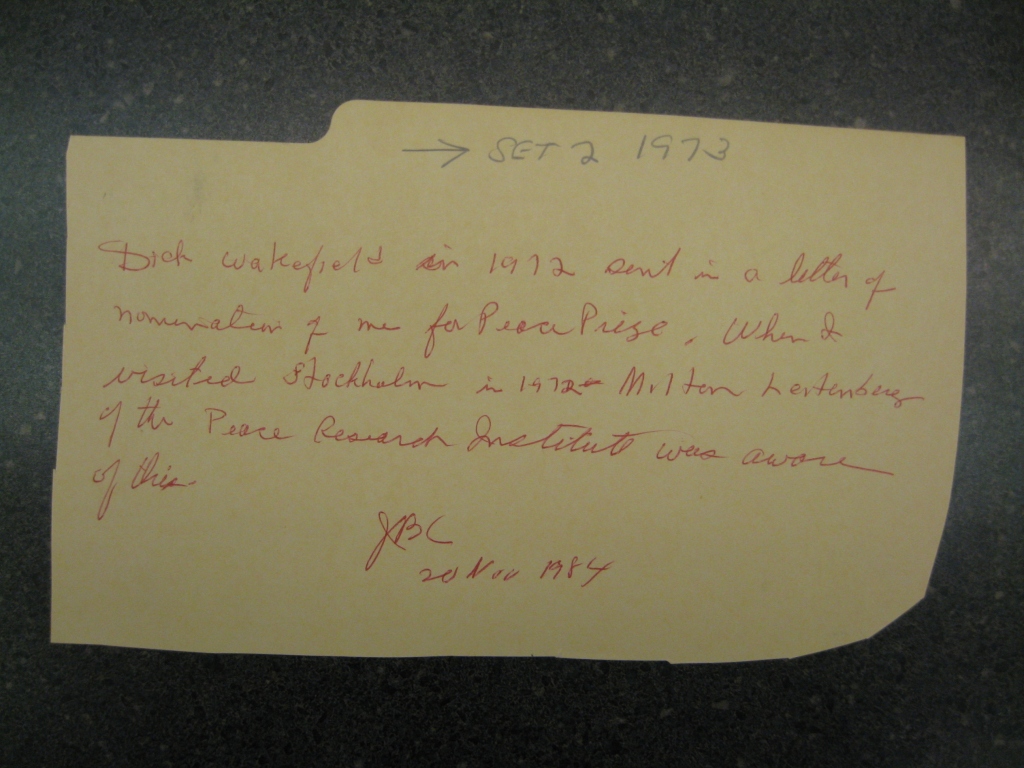 My mother told two stories about this conference.

One was that she walked into a conference room to find Jack (Dr. Calhoun) and Arthur C Clarke standing on their heads.

The second story was about the flight home.  I gather it was a smaller plane and they hit turbulence.  She commented that several of the scientists and space people were afraid of the turbulence, which she seemed to find ironic.

A few of the attendees, per Stuart Umpleby:

1972 Calhoun’s insight was sought by the District of Columbia Jails regarding the housing of inmates. The date of the first paper is 1972 and is listed as “Part B”.  Of the other three papers the only one in his file was “Part D”.

1973, Rome: Special World Conference on Futures Research It was while he was attending this conference that Dr. Calhoun met Pope Paul VI. A document on the work of the groups at the Rome Special World Conference on Futures Research, 1973 – 79pgs

Excerpt from this book:

The World Population.  1974.  Documentary on the population explosion, produced by UNESCO for the United Nations.  Approximately 120 minutes.  [note: According to Aprà’s filmography in Roberto Rossellini: Le Cinéma révélé, the film was shown during a congress on world population held in Bucharest in 1974 and subsequently distributed by the United Nations throughout the world.]

At a later date, John Calhoun’s niece Deborah recalls being at the Cheshire Dr house with her parents, Gene & Joyce Gressley, and Dad calling to say he was bringing Roberto Rossellini home for dinner.  Apparently Edith Calhoun made an artichoke dish, which became a family favorite, for the first time that night.